So, Video DownloadHelper says it needs a converter for doing aggregation. What's that ?

If some video variants are contained into a single file, some others separate the audio and video streams into two distinct files. Those variants are called adaptive and can easily be spotted in Video DownloadHelper panel as their description holds the ADP word. Generally, high quality video variants are only available from the servers as adaptive. 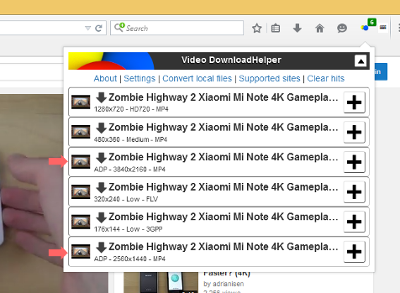 Since your local video player is likely to require a single file, aggregating audio and video files is necessary once those files have been downloaded. This cannot be done reliably from an add-on, this is why DownloadHelper requires the installation of an external converter application that it will use in the background.

The converter can run on Windows, Mac OS X and Linux (probably on other Unix-based systems but it has not been tested), however the installation method differs on each platform. Check this link for installation details.

In previous 4.x.x DownloadHelper versions, those adaptive variants were simply ignored and not displayed in the user interface, so that feature (dealing with adaptive variant) is new but it comes with its contraint (installing a converter).

If you are sure you don't want to install the converter and prefer not to see adaptive variants in the interface, open the Video DownloadHelper settings, section "Video Qualities", and move the "Adaptive n" items to be the bottom of the "Variants" list.

Note that videos processed through the converter may contain a sign in the corner. You may want to check why it is so.